Distinguishing between these different forms of Hydrogen can be confusing to those of us who flunked high school chemistry. Here is an attempt at clarification.

Atomic hydrogen is number 1 on the Periodic Table of Elements. It consists of one proton and one unpaired electron which means that it is a free radical.
However an atom of hydrogen rarely exists on its own because its unpaired electron eagerly seeks to join up with another electron.

The molecular form of hydrogen is more common.

H2 is a gas which forms when two hydrogen atoms bond together and become a hydrogen molecule. H2 is also called molecular hydrogen.It consists of two protons and two electrons. Consequently it is the most common form of Hydrogen because it is stable with a neutral charge. H2 is not a free radical. It is the antioxidant in ‘hydrogen-rich’ water.

H2 is the smallest molecule in the universe. That means it can go where nothing else can …including into your mitochondria which are the powerhouses of your cells. Hydrogen gas cannot be kept in plastic because it will pass right through the walls of the container.

When the Hydrogen atom loses an electron all that is left is a proton. It becomes the positively charged hydrogen ion known as H+. This is the form of Hydrogen that produces the ATP enzyme that powers our cells and mitochondria.

The H+ hydrogen ion is the basis of the pH scale.

Hydride is a hydrogen atom which has an extra electron. This means that it is a negatively charged ion, or anion. That is why Hydride ion (H-) has the minus sign distinguishing it from a regular Hydrogen atom (H). The two dots after the H means that this ion has two electrons instead of just one. The extra electron means that H- is not a free radical however it is not stable because this form of hydrogen is a very strong base (extremely alkaline) which reacts with water to produce hydroxide (OH–and molecular hydrogen (H2).

Hydroxide (OH–) is also known as the hydroxyl ion. When water dissociates or comes apart into its component parts it forms OH– (hydroxide ions) and H3O+ (hydronium ions).
2H2O ⇆ OH– and H3O+

This reaction is reversible. The hydroxide ion also reacts with the hydronium ion (H3O+) to become two water molecules.

Hydroxide (OH–) is sometimes confused with the hydroxyl radical (OH•). The dot to the upper right of the OH indicates an unpaired electron which means that Hydroxyl is a free radical, actually one of the most reactive oxygen radicals. Hydroxide and Hydroxl are two entirely different species. It is important to not confuse them.

A water molecule (H20) plus a hydrogen ion (H+) becomes a hydronium ion (H3O+). The H+ ion is a lone proton with a powerful charge. It does not exist on its own in an aqueous solution because it is immediately attracted to the unshared electrons in the oxygen atom of H2O. The result is Hydronium (H3O+). This process is reversible. Two water molecules can disassociate to form hydronium plus hydroxide.
2H2O ⇆ OH– and H3O+
Experiments indicate that the proton (H+) is very promiscuous. It changes from one H2O partner to another many times per second creating a new H3O+ ion as it moves.

pH stands for potential of Hydrogen and is actually a measurement of the concentration of hydrogen ions (H+) in a solution. Water breaks down (dissociates) into protons (H+) and hydroxides (OH–). This reaction is reversible.

Because H+ immediately associates with H2O to form H3O+ (Hydronium), pH can also be said to be a measurement of the concentration of H3O+ in a solution.

This entry was posted on Wednesday, October 18th, 2018 at 7:24 pm and is filed under Water Treatment Guide. You can follow and reffer to this post at Water Matters website. 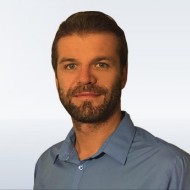